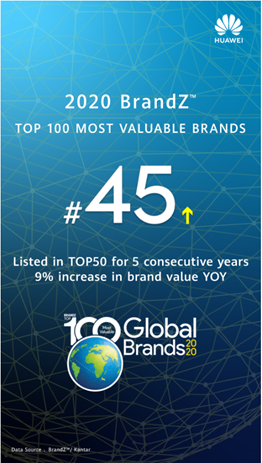 Underpinned by an unrelenting drive for innovation, Huawei makes the top 50 for the fifth consecutive year

Huawei is steadfast in its commitment to innovation and driving value for global consumers. In the latest BrandZ Top 100 Most Valuable Brands study, published by WPP and Kantar, Huawei is ranked 45th, up two places from last year, with a US$29.4 billion brand value (nine percent increase YoY). 2020 is also the fifth consecutive year where the annual publication features Huawei as one of the top 50 most valuable brands worldwide, a testament to Huawei’s success in executing its long-term vision of building a fully connected, intelligent world.

According to the report, the total brand value of top global brands saw a brand value hike of 5.9 percent compared to the year prior, with the technology sector remaining as the top contributor for 15 years in a row, representing 37 percent of the top 100’s total brand worth. Chinese brands are also gaining in prominence with 17 making the top 100, including five being recognised as among the ‘Top 20 Risers’ – brands that increased most in value.

The past year has seen Huawei hone in on its strategy to diversify and broaden its offerings in both domestic and overseas markets. During its Virtual Launch in February, Huawei launched an array of new products, including the 5G foldable smartphone HUAWEI Mate Xs, HUAWEI MatePad Pro 5G tablet and AppGallery, Huawei’s first-party app distribution platform. The event also saw Huawei formally present its All-Scenario Seamless AI Life Strategy, and reaffirm its efforts to invest into the full stack of consumer electronics technology ranging from 5G to AI. The HUAWEI P40 Series, launched in the following month, set a new bar for mobile imaging technology, offering an all-day Super Definition photography experience to consumers with a trio of cutting-edge camera smartphones.

The BrandZ study comes in the wake of IDC’s quarterly announcements about its findings from its Worldwide Mobile Device Trackers. Key takeaways include: Huawei has held its title as the world’s second largest smartphone maker with a 17.8 percent market share; the company’s continued momentum in the wearables sector resulted in shipments going up by 62.2 percent YoY; and a 12 percent share of the global tablet market secures Huawei’s place as the third largest tablet vendor worldwide[1]. Meanwhile, independent analyst firm Canalys has pegged Huawei as one of the world’s top 5 true wireless audio product manufacturers[2]. Huawei’s PC business also saw a YoY sales increase of 120 percent in the first quarter of the year.

Business consultancy firm Boston Consulting Group (BCG) also recently unveiled its annual Most Innovative Companies report, which names Huawei the world’s sixth most innovative company, ascending 42 ranks from last year. The rankings are in large part based on a survey that BCG conducted from August 2019 through to October 2019. BCG assesses the companies’ performance on multiple facets including global mindshare, industry peer view, industry disruption and value creation. Among the top 50 companies listed, Huawei had the most significant leap upwards and is the highest ranked Chinese company.

Further, Huawei has been working alongside with developers and partners to cultivate an all-scenario ecosystem of software, which is integral to its envisioned smart future. For example, Huawei is committed to fully opening up its chip-device-cloud capabilities to accelerate app experience innovation, and has earmarked US$1 billion to fund the Shining-Star Programme, an initiative that offers developers a range of services that help them launch their ideas to market.