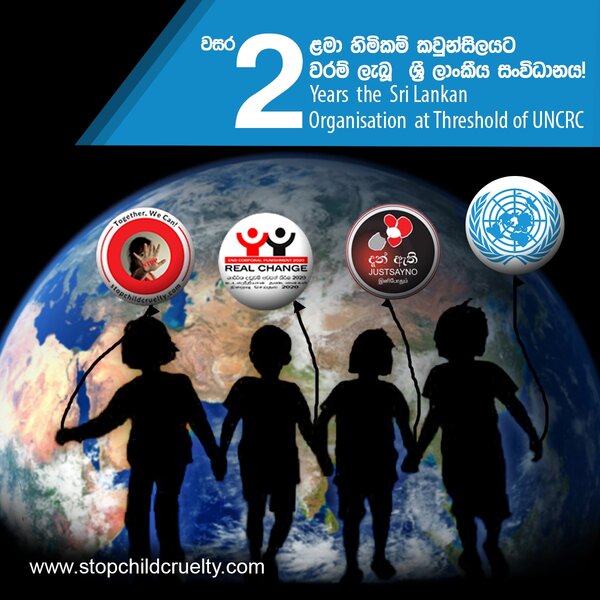 Stop Child Cruelty Trust (SCC), an organization committed to ending cruelty to children especially corporal punishment is the sole organization registered with the Office of the United Nations High Commissioner for Human Rights (OHCHR) and is a key stakeholder of the periodic review team of the United Nations Committee of the Rights of the Child (UNCRC). The SCC questions whether Sri Lanka can honestly celebrate the World Children’s Day when the government data confirms over 20,000 cases of child abuse stuck in Attorney General’s Department over the past decade, 5292 cases of child sexual harassment cases reported in the first six months of 2020 and a child is sexually molested every two hours.

The SCC believes that the World Children’s Day which falls on October 1st should be a day of celebration of a happy and safe country where children can grow peacefully, achieve boundlessly and contribute selflessly as Global Citizens.

Sri Lanka signed the United Nations Convention on the Rights of the Child (UNCRC) in 1991 promising to protect its young citizens forthright. Since the Sustainable Development Goals (SDGs) was implemented in 2015, the government of Sri Lanka has committed to achieving children’s welfare in line with SDG 2030. The National Child Protection Authority (NCPA) was established via Act no. 50 of 1998, but Sri Lanka is yet to implement the National Child Protection Policy. Despite the efforts taken by successive Governments, Sri Lanka received a red alert from UNCRC in February 2018 due to lethargy in child protection.

The SCC handed over three petitions signed by thousands of Sri Lankans and a video message from children to His Excellency President Gotabaya Rajapaksa. Themembers of the SCC have made the following personal appeals to HE President to promote child rights and protection:

Patrons of the Trust, Sidath Wettimuny, Chairman of Nobles Group of Companies and Former National Cricketer and Otara Gunewardene, Director, Otara Foundation, say “Make the NCPA an Independent Authority and Implement the National Child Protection Policy urgently and expedite the judiciary process to conclude a case of child abuse within 90 days.”

Tikiri Wipfler, Research Executive and Gayan Gallage, Media Executive appeal to “Regularize all International schools, ensure that Ministry of Education circular banning corporal punishment No. 12/2016 and other circulars are implemented in all schools and Implement laws to protect the privacy and confidentiality of children who are victims and witnesses of crime.”

Aritha Wickremasinghe, Human Rights Activist reiterates that “child victims must not be treated as criminals and child rape is considered a non-bailable offence.”

The SCC vigorously raises awareness of the child protection crisis and hopes to work closely with The President and the government in securing a happier and safer country for the true beneficiaries of the future.